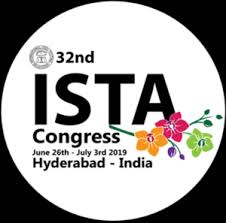 Telangana is hosting the triennial International Seed Testing Association (ISTA) Congress in Hyderabad. ISTA congress is being held for the first time in Asia. The Congress being held from 26 June to 3 July 2019 is expected to help State to implement its plans into actions.

Host: The eight-day conference is being jointly hosted by Ministry of Agriculture and Farmers’ Welfare and Telangana government.

The congress will have main event for three days and technical committee meetings/sessions over next 5 days.

Participants: Over 400 experts, policy makers, scientists, researchers and members of seed industry from more than 80 countries including the UK, South Africa, Argentina, New Zealand, Canada and Austria, will deliberate on seed policies, production and quality aspects.

Discussion: Conference will be attended by global stakeholders representing seed production, processing, seed testing laboratories, biotechnology and associated organisations that will be showcasing their products, solutions and services and will also discuss recent developments in seed research and in seed technology.

Workshops: are being held during the event, would focus on varietal identification, seed sampling, purity, germination and moisture.

Significance: State government of Telangana is keen towards making best use of ISTA 2019 platform to showcase state’s potential in seed production and export its seeds in international market.  State government is also planning to adopt latest technology and innovative methods to increase seed production, and to create awareness among farmers of State.

Telangana is India’s major hub of seed production as it meets about 60% of country’s needs in major crops like rice, soyabean, sorghum, maize, pearl millet and cotton.

As it is in Telangana, over 400 seed companies are operating with 413 seed processing and 13 seed testing units and about 2.5 lakh farmers in 1,500 villages are engaged in seed production in 3 lakh acres who produce about 65,000 tonnes seed of various crops.

It produces nearly 65 lakh quintals of seed every year and has also emerged as a major exporter through Organisation for Economic Cooperation and Development (OECD) to various countries in Europe and South America, apart from Australia.

Also with a view of exporting seed, mainly under Organisation for Economic Cooperation and Development (OECD), Telangana government has already started (from Kharif 2016) seed certification for this purpose with nodal agency called Telangana State Seed and Organic Certification Authority (TSSOCA).

Function: It is an association of laboratories who are authorised to check on marketability of seed as defined in various countries’ laws. It also determines seeds ability to germinate, vigour of seed, and content of genetically modified organisms (GMOs) in seed and test results, as certified by ISTA member laboratories, are accepted by trading partners of World Trade Organization (WTO) in international seed traffic.

The year 2019 sees the Seed Symposium of 32nd ISTA Congress.