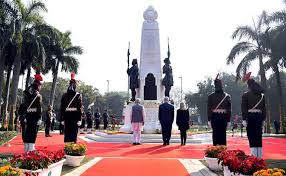 The iconic Teen Murti Chowk in central New Delhi was renamed as Teen Murti-Haifa after Israeli City Haifa in solemn ceremony attended by Prime Minister Narendra Modi and his Israeli counterpart Benjamin Netanyahu.
The idea of renaming Teen Murti road and chowk after Haifa was proposed in New Delhi Municipal Council (NDMC) council meeting during Prime Minister Narendra Modi’s visit to Israel in July 2017. This year marks the centenary year of Battle for Haifa. The renaming of the iconic war memorial is aimed at being symbolic gesture of India’s friendship with Israel.

Teen Murti Chowk was named to mark role of the three cavalry regiments. The three bronze statues at Teen Murti represent Hyderabad, Jodhpur and Mysore Lancers who were part of 15 Imperial Service Cavalry Brigade in British Indian Army. The brigade had carried out victorious assault on fortified city of Haifa also known as Battle for Haifa on September 23, 1918, during World War I.
There are various accounts of this heroic battle – all narrate valour with which lancers undertook assault on garrisoned city protected by joint force of Ottomans, Germany and Austria-Hungary. The liberation of Haifa cleared supply route for Allies (Britain, France and Italy) to city through sea. 44 Indian soldiers made ultimate sacrifice during liberation of the city in WW I.
Till date, 61 Cavalry celebrates September 23 as its Raising Day or “Haifa Day” to respect soldiers who lost their lives in battle and to mark end of 400 years of Turkish control over the city.