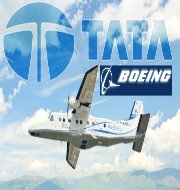 Tata Advanced Systems Limited (TASL) and US-based aircraft maker Boeing have signed a strategic framework agreement for aerospace and defence manufacturing.
The agreement was signed by Sukaran Singh, MD & CEO of TASL and Shelley Lavender, President of Boeing Military Aircraft in lines with Make in India in Hyderabad, Telangana.
As per agreement, both companies will collaborate in the sphere of aerospace and defence manufacturing along with exploring the potential of developing integrated systems, including unmanned aerial vehicles (UAV).
With this Boeing for the first time will develop high-end aerospace and defence sector technology in India, which will cater to the global markets.
Presently, TASL has a big aircraft manufacturing footprint in various companies like Adibatla Aerospace and Precision Engineering Park in Hyderabad. It is has a couple of Joint Ventures (JV) including in Tata Sikorsky Aerospace and Tata Lockheed Martin Aerostructures.

The Pi Beam, which is an IIT Madras-incubated start-up, recently launched the electric two-wheeler c...

Recently on Army Day (January 15, 2021), the Indian Army displayed its combat drones that are part o...

The first driverless train operations in India were initiated by Prime Minister Narendra Modi on Dec...