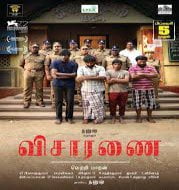 The Tamil film “Visaranai” has been selected as the India’s official entry to Oscars 2017 (89th Academy Awards) in the Foreign Language Film category.
The film has been directed by Vetrimaran and is produced by actor Dhanush’s Wunderbar Films. It is based on M.Chandrakumar’s novel Lock Up.
Key Facts