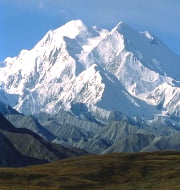 United States has changed the name of tallest mountain in North America Mount McKinley to its original native name Denali.
It was announced by US President Barack Obama ahead of his three-day visit to Alaska to highlight the issue of climate change. It was renamed following the lead of the state of Alaska, US Department of the Interior (USDoI) in conjunction with the US Board on Geographic Names (USBGN).
Key facts