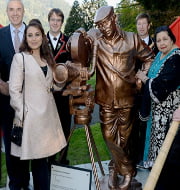 Switzerland Government has honoured late veteran filmmaker Yash Chopra by unveiling bronze statue at Interlaken.
The bronze statue weighing about 250 kilos was inaugurated by his wife Pamela Chopra and daughter-in-law Rani Mukerjee.
Chopra was known for opening a legacy of South Asian tourists flocking to Switzerland and spend much time in the country besides shooting his movies.
This statue has been installed at the heart of Interlaken, inside the Kursaal area near the Congress Centre which is a prime, popular spot with tourists.
This is not the first time the filmmaker has been honoured in this way by the Switzerland Government. Earlier in 2011, government of Interlaken awarded him the honorary title of Ambassador of Interlaken and Jungfrau Railways had named a train after him – an honour shared only with the railway’s founder, Adolf Guyer.