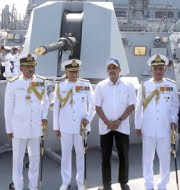 INS Chennai, a Kolkata-class stealth Guided missile destroyer ship was commissioned into Indian Navy’s combat fleet by Defence minister Manohar Parrikar in Mumbai, Maharashtra.
It is the largest-ever destroyer to be built in India. It is third and last Kolkata-class guided missile destroyers built under Project 15A. Thus, its induction also marks the end of the Project 15A.
Key features