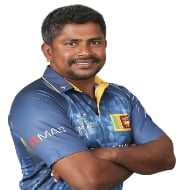 Veteran Sri Lankan left-arm spinner Rangana Herath (38) has announced his retirement from T20 and One Day International Cricket (ODI).
However he will continue to play in Test matches which always have been his personal passion.
He took the decision of retiring from T20 and ODIs in order to make room for fresh talent to be groomed for the 2019 World Cup.