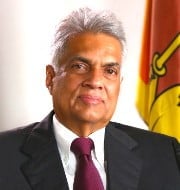 Sri Lankan Government has announced that they would not any country to set up naval base on its territory.
This announcement was made by Sri Lankan Prime Minister Ranil Wickremesinghe while he was speaking at the International Maritime Dialogue at Galle, Sri Lanka.
Significance of this announcement

Under the so called String of Pearls Theory