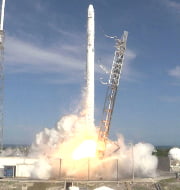 Private SpaceX Falcon 9 rocket contracted by NASA has successfully launched the first inflatable habitat room that will attach to the International Space Station (ISS).
The Falcon 9 rocket lifted off on schedule from Cape Canaveral Air Force Station in Florida, United States.
In another major success for SpaceX, the reusable main stage booster of Falcon 9 rocket for the first time successfully landed on an ocean (floating) platform, known as a drone ship, off the coast of Florida.
Key facts

It should be noted that this was also the first NASA cargo run for SpaceX since its June 2015 mishap, when an unmanned cargo rocket exploded soon after take-off.