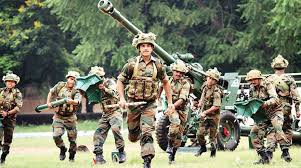 South Western Command of Indian Army is conducting ‘Vijay Prahar’ exercise in Mahajan area close to Suratgarh in Rajasthan. In this exercise, over 20,000 troops are participating with fighting equipment for couple of weeks to fine-tune jointmanship with the Indian Air Force.

The month-long exercise is aimed to orchestrate wide spectrum of threats which are planned to be tackled through high tempo joint air and land operation. It involves hundreds of aircrafts, thousands of tanks and artillery pieces supported by real time intelligence, surveillance, reconnaissance and logistic support.
The exercise is being conducted to practice troops in penetrative manoeuvres across the obstacle ridden terrain under a nuclear umbrella. In it, formations of South Western Command will be practising and operationalising certain innovative concepts of operating in network centric environment.
It will also deploy integrated employment of modern day sensors with weapon platforms, employment of attack helicopters in air cavalry role and bold offensive of application of the Special Forces. The formations will refine their drills and procedures for fighting in nuclear environment during course of the exercise.

The South Western Command of the Indian Army was established in April 2005 and became fully operational on 15 August 2005. It is headquartered at Jaipur, Rajasthan. The command’s operational units include I Corps, formerly under Central Command, and X Corps transferred from Western Command.