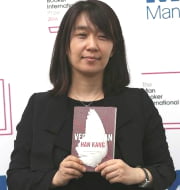 South Korean author, Han Kang, has won the 2016 Man Booker International Prize for her novel ‘The Vegetarian’.
With this Han becomes the first South Korean to win this prestigious literary prize. The writer and her British translator Deborah Smith will share the 72,000 dollars prize money.
Han’s novel ‘The Vegetarian’ tells a story of a wife (Yeong-hye lead character) who decides to become a vegetarian. The decision provokes cruelty from her husband, and from her father, and obsession from her sister’s husband, as the woman, she dreams obsessively about becoming a tree.
The novel was picked unanimously by the panel of five judges chaired by Boyd Tonkin. It was chosen amongst six other novels.