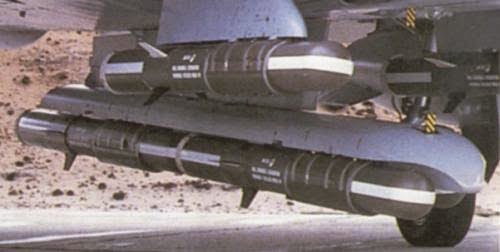 The Defence Research and Development Organisation (DRDO) has successfully tested indigenously developed light weight glide bomb Smart Anti Airfield Weapon (SAAW).
Total of three tests with different release conditions and ranges were conducted at Chandipur in Odisha and were all successful. The bomb was fired from an air force aircraft and was guided through precision navigation system. It reached the targets at greater than 70 km range, with high accuracies

The SAAW project is India’s first fully indigenous anti-airfield weapon project sanctioned by Government in September 2013. SAAW is a long-range lightweight high precision-guided anti-airfield weapon. It is 120 kg smart weapon capable of engaging ground targets with high precision up to a range of 100 km. It can be used to destroy bunkers, runways, aircraft hangers and other reinforced structures.
SAAW’s deep penetration capabilities and high explosive warhead carrying capacity will allow Indian Air Force (IAF) to easily hit targets across border without putting pilot and aircraft at risk. It can be integrated into the varied types of fighter jets with the IAF.  It will be inducted soon into the Armed Forces

DRDO had conducted weapon’s first test from an IAF Jaguar aircraft in Bengaluru in May 2016. The second test was conducted from a Su-30MKI fighter in December 2016.