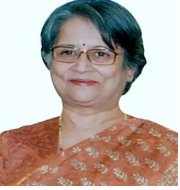 Appointment Committee of the Cabinet has appointed senior bureaucrat Sindhushree Khullar as the Chief Executive Officer (CEO) of NITI Aayog.
She will serve in the post for one year starting from 1st January.
She is 1975-batch officer of the Indian Administrative Service’s (IAS) Union Territories cadre. She had retired from the service in March 2013. Earlier, she was member-secretary of Planning Commission.
Background
Union Government had replaced 6 decade year old Planning Commission with a new institution named National Institution for Transforming India (NITI Aayog) on 1st January.
This new institution aims to serve as Think Tank of the Government. Noted Economist Arvind Panagariya was appointed Vice Chairman of the NITI Aayog.

Strategic disinvestment and transfer of management control in IDBI

The Union Cabinet recently approved the Strategic Disinvestment and transfer of management control i...

NITI Aayog recently said that the Government of India should provide incentives on purchase of elect...

The Expenditure Secretary T V Somanathan was recently designated as the Finance Secretary by the App...

NITI Aayog recently launched Poshan Gyan along with the Bill and Melinda Gates Foundation and the Ce...