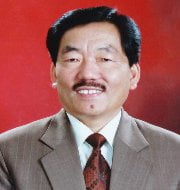 Sikkim’s Pawan Chamling (68) created history by becoming longest-serving Chief Minister in India. He has completed 23 years, four months and 17 days of uninterrupted service in office. He surpassed earlier record held by Jyoti Basu, 5-term West Bengal CM who held office for 23 years. Basu was in office from June 21, 1977 to November 6, 2000.

Pawan Chamling was born on September 22, 1950, at Yangang, South Sikkim. He had dropped out of school after matriculation. He took his plunge into politics at age of 22 during the time when negotiations were underway for merger of the kingdom of Sikkim with India. He started his active political career at age of 32. He was elected aspresident of Yangang Gram Panchayat in 1982. In 1985, he was elected to the Sikkim Legislative Assembly for the first time. He had served as Minister for Industries, Information and Public Relations from 1989 to 1992 in Nar Bahadur Bhandari cabinet in the state. After a series of political upheavals in Sikkim, he formed Sikkim Democratic Front (SDF) in 1993. He was sworn in as chief minister of Sikkim for the first time on December 12, 1994 and now has been in office for fifth consecutive term.