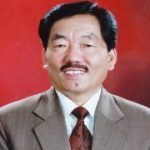 Sikkim Chief Minister Pawan Chamling was conferred with the Yug Kavi Siddhicharan Award, one of the Nepal’s prestigious literary award.
The award was bestowed upon him by Nepal Prime Minister K P Sharma Oli for his commendable contributions in promoting Nepali literature in India.
The award ceremony was organised by Siddhicharan Shrestha Academy on the occasion of 105th birth anniversary of the late poet Shrestha. Yug Kavi Siddhicharan Award carries a certificate of appreciation and a sum of 100,000 Nepali Rupees.
Pawan Chamling is an author of many books in Nepali, English and Hindi. He is also a publisher. He has been awarded twice by the Sikkim Sahitya Parishad for the best poem Chintan Puraskar in 1987 and Bhanu Puraskar in 2010.
His other works in Nepali include Prarambhik Kavita (1978), Antyaheen Sapana: Mero Bipana (1985), Ma Ko Hoon! (1992) and Sikkim ra Nariko Maryada.