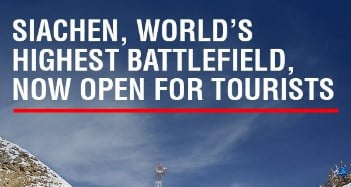 Defence Minister Rajnath Singh announced that the Siachen Glacier, the world’s highest battlefield, is now open for tourists and Tourism. He made the announcement on Siachen while inaugurating newly constructed ‘Colonel Chewang Rinchen Bridge’ over Shyok River in Eastern Ladakh.

The government gave its nod to the proposal moved by Indian Army for opening up Siachen to tourists with a focus to showcase working conditions of troops serving in sector.

The entire area from Siachen Base Camp to Kumar Post that lies above 15,000 feet has been opened for tourism purposes. Siachen Base Camp– at Partapur is at an altitude of 12,000 feet and temperatures there can dip as low as -60 degrees during winter. Highest post in Siachen is Bana Post (at 23,000 feet).

Other than an annual civilian expedition, this is the first time that area has been opened by Indian army for tourists. Indian army, which is deployed in glacier, will be examining who all will be coming to area.

The step has been taken by government to boost tourism in Ladakh as well as to give people a window to appreciate the tough work done by Indian Army jawans and engineers posted in the extreme weather and inhospitable terrains.

The glacier is at the height of around 20,000 feet in Karakoram range. It is known as the highest militarised zone in world. It has been a bone of contention between India and Pakistan for long and Indian Army gained strategic control of glacier in 1984 following ‘Operation Meghdoot‘.