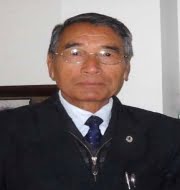 Shurhozelie Liezitsu (81) was sworn-in as the 17th Chief Minister of Nagaland. He was administered the oath of office and secrecy by Governor PB Acharya at a ceremony in the state capital Kohima.
He succeeded TR Zeliang, who had resigned as the Chief Minister following widespread protests over reservation to women in local body elections. Besides CM, 10 other members of the Council also took oath.

Shurhozelie Liezitsu, president of Naga People’s Front party was invited by the Governor to form a new government following the resignation of Zeliang. He had emerged as the unanimous choice for the post and formally staked his claim after 42 of the 49 legislators unanimously supported him as their new legislature party leader to break the deadlock between the agitating tribal groups and the government. Nagaland was in political turmoil since January 2017 after the TR Zeliang led NPF government had decided to hold local body elections in 12 towns across the state with 33% reservation for women. Various tribal groups  had opposed the civic elections on the ground that certain provisions of Nagaland Municipal Act, 2001 related to women’s reservation framed under Article 243(T) of the Constitution (Reservation of seats in municipalities) infringed upon Naga tradition and customs that are protected under Article 371(A) of the Constitution (Special provision with respect to Nagaland).