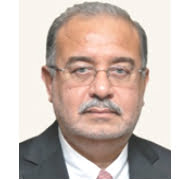 Sherif Ismail has sworn-in as the new Prime Minister of Egypt. He was administered oath to the office by President Abdel-Fattah El-Sisi.
He will succeed Ibrahim Mehleb who had resigned from office following a corruption scandal involving his cabinet minister.
Along with Sherif Ismail, 33 ministers of his Cabinet also sworn-in which includes 16 new faces and three women.
Prior to this appointment, Sherif Ismail had served as the Minister of Petroleum and Mineral Resources from July 2013 to September 2015.
By profession, Ismail is an engineer and had earlier worked as Chairman of Egypt government owned oil holding company, Ganoub El Wadi Petroleum Holding Company (GANOPE).
Powers and Importance of Egyptian Prime Minister: He heads the cabinet, which in turn plays a leading role in shaping the agenda of the houses of Parliament. The cabinet led by PM also propose laws to Parliament as well as amendments during parliamentary meetings.