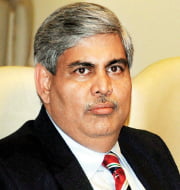 Veteran cricket administrator Shashank Manohar (58) was elected unopposed as ICC’s (International Cricket Council) first independent Chairman.
He was the sole nominee for the position and the ICC Board has now unanimously supported his appointment. He will have tenure of two years.
Background