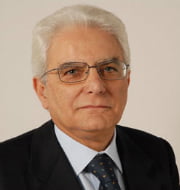 Italy’s parliament has elected constitutional court judge Sergio Mattarella as the country’s president.
He will Italy’s 12th president and succeed Giorgio Napolitano who had resigned earlier in January 2015 citing reason of poor health before his 2020 expiry term.
President of Italy: His role is mainly ceremonial but can declare legislation unconstitutional. He also has the power to dissolve parliament, nominate prime ministers and call early elections. He has tenure of 7 years.