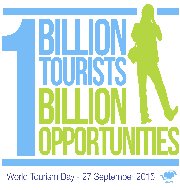 Every year World Tourism Day (WTD) is observed on September 27 to raise awareness about the importance of tourism.
Theme for 2015: “One Billion Tourists, One Billion Opportunities“. This year’s theme emphasizes the impact of the tourism sector on economic growth, job creation and development.
Observations in India: To mark 2015 WTD, Union Ministry of State for Tourism and Culture established a Medical Tourism and Wellness Board.  The board will give a new shape to medical tourism keeping in view its importance in the country.
Union Government also had declared free entry for tourists to nearly 200 ticketed monuments and museums across India except in Bihar as a part of celebrations of 2015 WTD.
Background