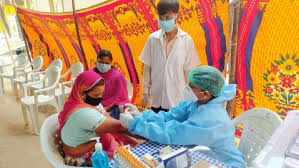 On September 29, 2020, the Indian Council of Medical Research released a report on second sero survey findings. The survey was conducted in 700 villages from 21 states. The Government of India recommends to follow 5T strategy called Test, Track, Trace, Treat and Technology to be followed to prevent susceptibility.

Mumbai showed the highest sero prevalence with 57.8% of samples testing positive. Delhi recorded 29.1% sero prevalence. This is higher than the 23.1% that was recorded in the first survey.

Following Delhi, Puducherry of Tamil Nadu had the next highest prevalence of 22.7%. Chennai recorded 21.5%, Ahmedabad 17.6% and Indore registered 7.8%.