What is ULIP?
Unit Linked Insurance Policy (ULIP) is a category of goal-based financial solutions which combine the safety of insurance protection with wealth creation opportunities. Part of the investment made by a customer in ULIPs goes towards providing the insurance protection and residual portion is invested in a fund which in turn invests the money in stocks / bonds. The value of this part of the investment alters with the performance of the underlying fund opted by a customer.

Thus the protection element and savings element are distinguishable in ULIPs and they are managed as per the needs of the customer. ULIPs provide flexibility for the investors.

In Other words when a customer decides the amount of the premium to be paid and the amount of life cover from the ULIP, the insurer company deducts some portion of the ULIP premium upfront. It is called Premium Allocation Charge. The premium Allocation charge varies from product to product.
Fund Break UP:
The rest of the funds are invested in a fund or mixture of funds as chosen by the customer. The investment is denoted as units and is represented by the value that it has attained called as Net Asset Value (NAV).The mortality charges and ULIP administration Charges are deducted further on a periodic basis (mostly monthly) and the ULIP fund charges are adjusted from the NAV Value (Net Asset Value) on a daily basis.
The underlying investment is either in equity or in debt or in both of them. In other words the investments may be in equity, fixed-return or a mixture of both. It depends upon the Risk appetite of the customer. The fund value of the customer reflects the performance of the underlying asset classes. At the time of the maturity the customer is entitled to receive the fund value at current time of maturity. You may understand these facts by the following pie chart: 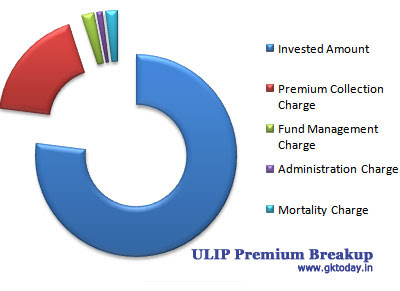 Why ULIPs became controversial?
As we can understand from the above discussion that ULIPs have both Insurance and Investment parts. There are ULIP plans which have no sum assured as well. Investments are subject to market risks and Investment come under the purview of market watchdog SEBI. Mutual Funds and other collective schemes are managed by SEBI. However Insurance is regulated by IRDA.

Background of ULIPs:
The ULIPs were introduced in 1960s and they are popular in many countries including India.

India’s first ULIP was issued by UTI and LIC. The investment was by UTI and insurance part covered by LIC.

The industry was open in 2000 and the life insurance companies started selling ULIPs. There was a boom in the share markets between 2005-2008 and during this time the ULIP’s products outperformed the mutual funds because of the combined benefits of insurance and investments and marketing strategies of the companies. At present, an estimated 70% of the new business premium for most insurance companies comes from the Unit Linked products.

After SEBI barred front loads on mutual funds in August 2009, MFs have been complaining that insurers’ agents are luring away customers looking for market investments. These agents receive higher front-end commission than what MFs’ agents are allowed.

Another main issue with ULIPs is of mis-selling, where the agent does not tell the policyholder that he stands to lose if he does not renew his policy annually. Also, in some policies, the returns are back-ended in the form of an assured loyalty bonus in the last year. If this is not communicated to the policyholder and he withdraws early, he stands to lose substantially.

In December 2009 and January 2010, SEBI had issued show cause notices to 14 insurance companies asking them why action should not be initiated against them for issuing investment products without SEBI’s permission.

On April 9, 2010, SEBI whole time member Prashant Saran passed the order putting a ban on ULIP products by these 14 insurers.

ULIP: Good versus Bad
In India the investments in ULIPs is covered under section 80C of Income Tax Act. In ULIP products Fund managers get more time to hold stocks because of the lock-in period and there are negative points for customers such as high costs like premium allocation charge, policy administration charge, and mortality rate. Besides, the benefits under Section 80 C go away if the holder surrenders the policy within 3 years.

ULIP: Insurance versus Investment:
The purpose of buying an insurance policy is that if the policy holder dies, the family is assured of certain amount. Since ULIPs are market Linked, there is uncertainty in this benefit and the ULIPs may defeat this benefit. In case of untimely death of a customer, the family is entitled to get the higher the sum assured or the market value. Then there are many variants of these schemes which guarantee cover five times or two times of initial premium or so on. There are many ULIP pension plans which don’t give any cover or sum assured.

Contentions of SEBI:
One of the main contentions for SEBI was that although a ULIP is an insurance product which comes under IRDA, part of it is also an investment product which should ideally be regulated by SEBI.The Insurance Companies which started selling ULIPs about 5-6 years ago, offered huge commissions to insurance agents and flooded the market with these products which nearly mirrored mutual fund (MF) products. The commissions on ULIPs are as high as 30%.
SEBI says that since ULIPs are investment products which mimic mutual funds so they should follow it’s guidelines. There is one aspect of SEBI’s action to curb the high commissions and ULIPs compared to Mutual funds. SEBI said : “Such products, which work in a similar way as mutual funds, should not be launched nor should money be raised from investors by way of new or additional subscription, till companies obtain the certificate of registration from SEBI” SEBI act clearly says that any product with exposure to the securities market comes under its purview. In this context, SEBI had issued show cause notices t0 14 companies on sale of Unit Linked Products without obtaining it’s approval. SEBI is said to have obtained the views of the Attorney General of India on the powers vesting with it to regulate ULIPs.

IRDA’s Viewpoint:
IrDA responded by saying that SEBI does not have the jurisdiction to regulate ULIPs. Further IrDA also says that there is no case for dual regulation of ULIPs. A day after SEBI barred the companies IrDA mandated to ignore the SEBI’s order and directed them to continue selling the product. IrDA, as per reports in newspapers , sought a legal opinion from NKP Salve, eminent jurist and former Union minister, before clarifying its position.

Ministry’s Role, Lifting the Ban & Current Status:
SEBI lifted the ban after the SEBI officials and IRDA officials met Union Finance Ministry officials. The Finance ministry restored status quo. The SEBI and IrDA agreed jointly to seek a legally binding mandate from an appropriate court. Now there is no ban on insurance companies providing ULIPs policies as part of an insurance policy.