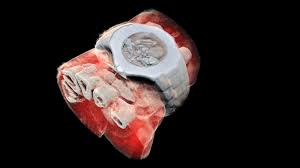 Scientists from New Zealand have performed world’s first-ever 3-D, colour X-ray on human. It has potential to improve the field of medical diagnostics. The new device is based on the traditional black-and-white X-ray but incorporates particle-tracking technology called Medipix developed by European Organization for Nuclear Research (CERN).

The Medipix technology developed by CERN works like camera detecting and counting individual sub-atomic particles as they collide with pixels while its shutter is open. This allows for high-resolution, high-contrast pictures. Its small pixels and accurate energy resolution makes this new imaging tool able to get images that no other imaging tool can achieve. The technology is being commercialised by New Zealand company MARS Bioimaging, linked to the universities of Canterbury and Otago which helped develop it.
Significance: This colour X-ray imaging technique can produce clearer and more accurate pictures and help doctors give their patients more accurate diagnoses. The images very clearly show difference between bone, muscle and cartilage and also the position and size of cancerous tumours.