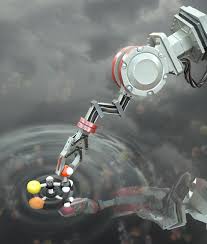 Scientists from University of Manchester have created world’s first ‘molecular robot’ — millionth of a millimetre in size. It can be used to build molecules and may help discover novel drugs.

The molecular robot is millionth of millimetre in size. It is made up of just 150 carbon, hydrogen, oxygen and nitrogen atoms which are basic building blocks required to form molecules. It can be programmed to move and build molecular cargo using a tiny robotic arm.
The molecular robot operates by carrying out chemical reactions in special solutions which can then be controlled and programmed by scientists to perform the basic tasks. It responds to series of simple commands that are programmed with chemical inputs.
Each individual robot is capable of manipulating single molecule. In terms of size context, billion of these molecular robots piled on top of each other will be only same size as a single grain of salt.
Significance: The molecular robot is so small, that it massively reduces demand for materials, dramatically reduce power requirements and can accelerate and improve drug discovery and rapidly increase the miniaturisation of other products.
Potential applications: Such molecular robots can be used for medical purposes, advanced manufacturing processes and even building molecular factories and assembly lines.