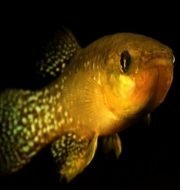 Scientists have discovered a new species of blind fish named Schistura larketensis inside a cave in East Jaintia Hills district of Meghalaya. The fish has been named after Larket village, where the cave has been found to encourage local people to take up biodiversity conservation.

Schistura larketensis has lost its sight during its living evolution in perpetual darkness inside the cave. It has also lost its pigments too while adapting to its habitat in the dark waters.The orbital diameter of fish decreases gradually as its matures with eyes completely absent in older individuals. Small and faintly blackish spot-like depressions are seen in place of eyes, indicating evolutionary and morphological adaptations.

Researchers had discovered the new blind fish in cave during an expedition several years ago. The cave is about 880 meters above sea level and over 7 km in length. The new fish sample was collected from small stagnant pools which are of few square meters in area and about 1-2 metres in depth. These pools are about 1600 feet high from main entrance of cave. The pool bed is mostly sandy with pebbles.

Though there are about 200 known species of similar kind of fish inhabiting streams and rivers throughout Indochina and Southeast Asia, this is first such discovery of blind fish. The new fish species can be immediately distinguished from all other species of Schistura (excluding Schistura papulifera for its vestigial subcutaneous eyes appearing as black spots). The high level of siltation, pollution and acidification in Jaintia Hills due to coal mining and cement plants is threatening local cave biodiversity.