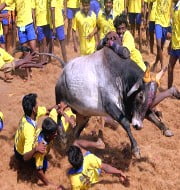 The Supreme Court has stayed the Union Government’s notification lifting ban on traditional bull taming sport Jallikattu during the festival of Pongal in Tamil Nadu.
In this regard the apex court rejected the plea of Union Ministry of Environment and Forests (MoEF) and Tamil Nadu Government.
This decision was taken by a SC bench comprising justices Dipak Misra and N V Ramana on petitions filed by various bodies including Animal Welfare Board of India (AWBI) seeking striking down of the MoEF’s notification.
Background