Saudi Women Activists face trial, a year on in detention 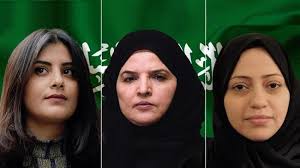 Several women activists of Saudi Arabia faced trial for the first time ever since they were detained a year ago in a highly intense case which has put the human rights record of the Kingdom under scan once again after the murder of Jamal Khashoggi.

Ibrahim al Sayari, the President of the Court has stated that there are nearly 10 women who will appear in the Criminal Court in the Saudi capital of Riyadh where the charges against them will be presented and taken up. Some of the notable women among the detainees include Loujain al-Hathloul, Aziza al-Yousef, Eman al-Nafjan, and Hatoon Al-Fassi. Sayari had made the above statement in front of various reporters and even diplomats who had been barred from attending the court session.

At the time of their arrests last year, the public prosecutor had stated that the State has arrested five men and four women on grounds of doubt of going against the interests of the country and even giving support to various hostile elements abroad. The ones who were detained were called ‘traitors’ by the state media and also ‘agents of embassies’ which had unnerved various foreign diplomats of the US, a key ally of Saudi Arabia.

In a tweet, detainee Hathloul’s brother has said that the trial has been shifted to a criminal court from the Specialised Criminal Court. Latter has been established to try both terrorism cases and other cases related to political offences. The public prosecution has been unable to make specific charges against the detainees. Hathloul has got no access to legal consultation or representation as stated by the International Human Rights group named Amnesty International.

In a highly odd and rare condemnation of the oil-rich kingdom at the UN Human Rights Council, 28 members of the European Union had asked Riyadh to release the activists. Even the US Secretary of State Mike Pompeo along with his British counterpart had stated that they have asked the Saudi authorities to release the activists and have raised the same issue multiple times.

The activists have alleged that some of them have been held in solitary detention and have been severely mistreated and tortured by electric shocks, sexual assault and even flogging. The allegations have been denied by the officials. As per the human rights groups, other detainees are Mayaa al-Zahrani, Samar Badawi, Nouf Abdelaziz, Nassima al-Saada, Shadan al-One, Mohammad al-Rabia, and Amal al-Harbi.

Hathloul had stood for putting an end to the driving ban on women and also on the male guardianship system. She had already been detained twice, once for a period of 73 days after she had attempted to enter Saudi Arabia while driving from the United Arab Emirates. Hathloul had graduated from the University of British Columbia in Canada and was also ranked third on the list of most powerful Arab women of 2015 by the Arabian Business Magazine in support of here daring activism.

It has been speculated by many activists and diplomats that the arrests are aimed to please the socially conservative elements who are opposed to various social reforms which are pushed by the Crown Prince Mohammad Bin Salman. The detentions were also a loud message to all the other activists to not to raise their head and voice against the governmental regulations, policy and social norms.

Prince MBS has also already sought help and support from the outside world to back his reforms. MBS had hit a major setback after his reputation nose-dived on the international scale after it was found that the royal-insider-turned-critic had been murdered by Saudi agents, at the Saudi Consulate at Istanbul last October.

Last two years have seen a tide of arrests of a dozen other activists, intellectuals and clerics.