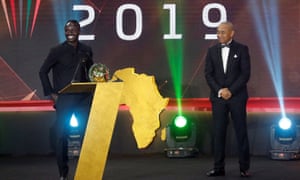 27-year-old Senegalese forward Sadio Mane was named as the Confederation of African Football’s (CAF) Men’s player of the year  2019 on Tuesday, 7th January 2020 after beating the likes of his Liverpool teammate and Egyptian forward Mohamed Salah and Algerian and Manchester City winger Riyad Mahrez. Sadio Mane became the second Senegalese after El Hadji-Diouf, who won the award twice back in 2001 and 2002. Sadio Mane has scored 30 goals in all competition last season and also played a decisive role throughout the UEFA Champions League campaign of Liverpool in 2018-19 season, in which the Reds went to top clinch the 2018-19 Champions League title after defeating Premier League rivals, Tottenham Hotspurs 2-0 in the finals.

Nigerian and Barcelona forward, Asisat Oshoala was named as the African women’s player of the year 2019, winning the award for a record 4th time.