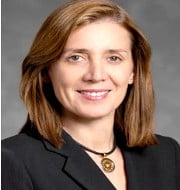 Ruth Porat has been appointed as Chief Financial Officer (CFO) of world’s largest search engine giant Google.
She will succeed Patrick Pichette who had announced his retirement on 10 March 2015 and assume charge on 26 May 2015. As CFO of Google she will directly report to Larry Page, CEO and Co-Founder of Google.
Prior to this appointment Ruth was working as CFO at Morgan Stanley. She joined Morgan Stanley in 1987. Since then she had severed at various posts and had played several key roles at the company. She has served as Global Head of the Financial Institutions Group, co-Head of Technology Investment Banking and Vice Chairman of Investment Banking.
Porat also was the lead banker on numerous technology financing rounds, including for Amazon, eBay, Netscape, Priceline and Verisign as well as for The Blackstone Group, General Electric (GE) and the New York Stock Exchange (NYSE).
She is also Vice Chair of the Stanford University Board of Trustees and a member of the US Treasury’s Borrowing Advisory Committee. She also serves as a Board Director at The Council on Foreign Relations and a member of the Advisory Council of the Hutchins Center on Fiscal and Monetary Policy at the Brookings Institution.