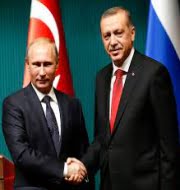 The Russia and Turkey have agreed to intensify military and intelligence contacts. They also have agreed on the need for aid to get to the northern Syrian city of Aleppo.
Decision in this regard was taken after meeting between Turkish President Recep Tayyip Erdogan, Russian President Vladimir Putin on sidelines of World Energy Congress in Istanbul.
Key Facts