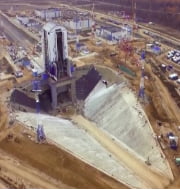 Russia has successfully launched the first rocket from its newly built Vostochny Cosmodrome in the Amur Oblast, in Russian Far East region bordering China.
The unmanned Soyuz-2.1a rocket is carrying three satellites as payloads namely Mikhailo Lomonosov (scientific satellite), SamSat-218 (an experimental nanosatellite) and Aist-2D (a civilian distance viewing satellite).
Vostochny Cosmodrome is a Russian spaceport for civilian launches under construction after it was launched in 2012. On completion in 2018, it will reduce Russia’s dependency on the Baikonur Cosmodrome in Kazakhstan.
Presently, Russia has the large military launch facilities but it relies primarily on the Baikonur Cosmodrome for the civilian launches.