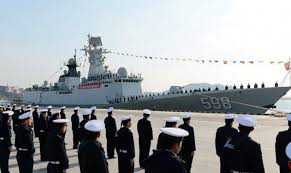 The Rizhao missile frigate is 140 metres long and 16 metres wide. It was designed and made in China. It has a displacement of nearly 4,000 tonnes. It is equipped with advanced weapons systems and has ability to attack enemy ships and submarines on its own or in coordination with other naval forces. It was launched in April 2017. Frigates are naval vessels intermediate between corvettes and destroyers.