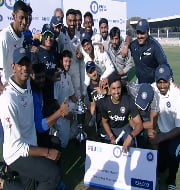 Rest of India has won the Irani Cup Cricket Title 2015-16 by defeating Mumabi in the final match of the cup by four wickets.
In the final match played at Brabourne Stadium in Mumbai, Rest of India overhauled the record victory target of 480 by making 482 for 6 on the fifth and final day.
This successful chase was also the best-ever run-chase in the Irani Cup history. It has bettered Rest of India’s previous 424, chasing target set by Delhi at the Ferozshah Kotla in 1982-83.