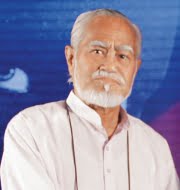 Renowned Manipuri theatre legend Heisnam Kanhailal passed away. He was 75.
He was actively been involved in threatre for the last 40 years in different roles of a playwright, director and also an actor.