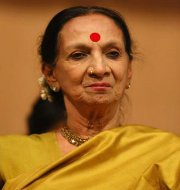 Legendary classical danseuse Mrinalini Sarabhai passed away in Ahmedabad, Gujarat due to age related health complications. She was 97.
She was trained in Bharatnatyam, Kathakali and Mohiniyattom and was educated at Shantiniketan under the guidance of Rabindranath Tagore.