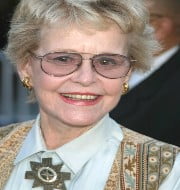 Renowned US actress and model Diana Douglas passed away in Los Angeles due to cancer. She was 92.
Diana Douglas was born as Diana Love Dill on 22 January, 1923 in Devonshire, Bermuda. Later she had immigrated to US.
She had started her career as an actress in 1942 with Warner Bros Studios and had appeared in more than 50 films since then. She had modelled on the cover of Life Magazine in 1943.
Some of her famous movies are The Indian Fighter; Planes, Trains and Automobiles; The Days of Our Lives. Her last appearance was Runs in the Family in 2003 and retired from acting in 2008.
She had married famous US actor Kirk Douglas in 1943 and is mother of Oscar winning actor Michael Douglas and Joel Douglas.