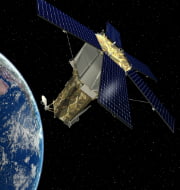 The Indian Space Research Organisation (ISRO) has successfully launched remote sensing satellite Resourcesat-2A into its dedicated orbit.
It was launched onboard of Polar Satellite Launch Vehicle  (PSLV)-C36 from first launch pad at Satish Dhawan Space Centre in Sriharikota. It was PSLV’s 38th flight and XL version of the rocket was used. It was the 37th consecutive successful flight of the rocket.

The PSLV rocket is a four stage/engine indigenous light-lifting rocket powered by solid and liquid fuel alternatively. It has emerged as the workhorse launch vehicle of ISRO offered for launching satellites for international customers. Between 1994 and 2016, the PSLV has launched a total of 121 satellites, of which 42 are Indian satellites and 79 satellites are from abroad. The PSLV-XL variant of the rocket is 44.4 metres tall and weighs 3201 tonnes.

On May 19, 2021, the United Launch Alliance launched the Atlas V Rocket from Cape Canaveral Space Fo...

A Space Mining Startup of China recently launched NEO-01. It is a robotic platform launched into the...

A Community Service Centre has been set up on board India’s first dedicated Solar Space Mission. T...