US recognises Jerusalem as the capital of Israel 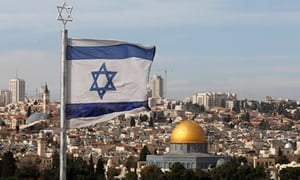 United States President Donald Trump has recognised Jerusalem as the capital of Israel, keeping with his long overdue campaign promise. He also announced plan to relocate US embassy, currently based in Tel Aviv to Jerusalem citing a 1995 law, the Jerusalem Embassy Act.
The International community including Arab countries and US closest allies France, Germany, Britain opposed the decision. They feel that it may have violent repercussions and future of Israeli-Palestinian issue must be determined through direct negotiations between Israel and Palestine themselves.

India has maintained a cautious stance saying its policy on Palestine is independent and not determined by any “third country”. India traditionally has supported independent Palestine as part of two-state solution. ‎India earlier also had expressed support for independent and viable Palestine and also participated in International Day of Solidarity with the Palestinian people.

Two-state solution is the primary approach to solve conflict between Israel and Palestine that will establish Palestine as independent state in Gaza and most of West Bank, leaving the rest of the land to Israel. It will establish an independent Palestinian state alongside Israel — two states for two peoples.
So far it is completely in theory, as two sides are still deeply divided over how to make it work in practice. ‎In theory, this will win Israel security and allow it to retain a Jewish demographic majority while granting the Palestinians a state. ‎This has been the basis for the goal of peace talks for decades. Both sides also claim Jerusalem as their capital and consider it centre of religious worship and cultural heritage.

Both Israel and Palestine lay claims to Jerusalem as their capital city. The holy city is home to sites that are holy to Jews, Muslims and Christians. For Jews, Jerusalem is holiest city as it is former location of the Jewish temples on Temple Mount. For Christians, it is site of Jesus’ crucifixion and Church of Holy Sepulchre. For Muslims, Jerusalem is site of Mohammad’s Night Journey to heaven and al-Aqsa mosque.
The Israeli government has been cantered in city of West Jerusalem since Israel’s founding in 1948. During the six-day-war O(1967 Arab–Israeli War) fought between Israel and neighboring Arab states of Egypt, Jordan and Syria, Israel annexed eastern part of Jerusalem, including the Old City. In 1980, Israel issued new law stating that Jerusalem as full sovereign and united capital of Israel.  While Palestinians claims East Jerusalem as capital of it.

Reasons for delay in reaching consensus

Palestinian leadership is divided between two governments that cannot come to terms over the two state solution. The leadership in West Bank lacks political legitimacy to make far-reaching but necessary concessions. Moreover, leadership in Gaza does not even recognize Israel, whose citizens it frequently attacks. Current Israeli leadership also nominally supports two-state solution but in practice it opposes it. ‎Israel is also skeptical of Palestinian independence.