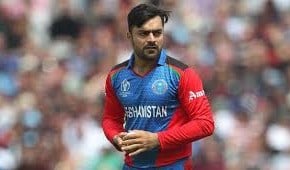 At the age of 20 years & 350 days, the spinner of Afghanistan, Rashid Khan has becomes the youngest captain in test cricket. He led Afghanistan for the first time in a Test Match and is now the youngest skipper ever in the history of Test Cricket.

Afghanistan had named Rashid as captain for all formats of game following the team’s disappointing World Cup campaign in England and Wales in early 2019 as the team was not able to win a single match in tournament.

Rashid has broken a 15-year-old record set by Tatenda Taibu of Zimbabwe in 2004, to become youngest cricketer to lead a side in longest format of game. He broke record during the one-off Test match between Afghanistan against Bangladesh.

Rashid achieved the youngest Test captain feat at 20 years 350 days old whereas Tabu had earlier scripted the record at age of 20 years 358 days.

When 19-year-old Rashid stepped in as skipper for Afghanistan against Scotland in 1st of ICC Cricket World Cup Qualifiers Bulawayo held in Zimbabwe in 2018, he had also become youngest captain in international cricket. Rashid was given captaincy in absence of Afghanistan skipper Asghar Stanikzai who was diagnosed with appendicitis.

Although Afghanistan had received the Test status in 2017 however it did not get an ideal start in longest format of game as they were defeated by India within 2 days in their 1st Test match. Later, in their next match, Afghanistan was able to outclass Ireland by seven wickets earlier this year.