Rajiv Mehrishi appointed as Comptroller and Auditor General of India 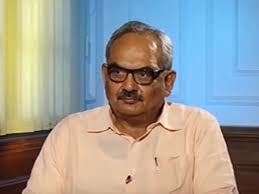 Senior IAS officer Rajiv Mehrishi was appointed as the next Comptroller and Auditor General (CAG) of India. He will succeed Shashi Kant Sharma who is going to demit office on September 25, 2017.

Mehrishi is IAS Officer of 1978 batch and belonged to Rajasthan cadre. He has degree in business administration from Strathclyde Business School, Glasgow. He also did BA (History) and MA (History) from St Stephen’s College, Delhi. He bureaucratic career spanned more than 30 years and has served in various key posts in both Centre as well as in Rajasthan government.
He had been Chief Secretary of Rajasthan, Principal Resident Commissioner of Rajasthan, Principal Secretary (Finance) etc. and also served as the Union Finance Secretary, Secretary (Overseas Indian Affairs) and Secretary (Fertilizers) in the Centre. He was appointed the Union Home Secretary in August 2015 and retired in July 2017.

CAG is constitutional office under article 148 and is appointed by President of India by warrant under his hand for period of 6 years or up to age of 65 years, whichever earlier. The conditions and services of CAG are prescribed by Parliament via CAG (conditions and services) Act, 1953 as amended in 1971. Allowances and pensions payable to or in respect of persons in that office are charged upon the Consolidated Fund of India (CFI).
Removal of CAG is as difficult and similar to removal of a Supreme Court Judge. CAG is not be eligible for any office under GOI post-retirement. It is because of these conditions of independence given to CAG’s office, the report of CAG are given due respect and made as reference.