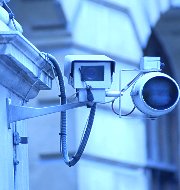 Union Railway Minister Suresh Prabhu inaugurated the Integrated Security System (ISS) at 6 railway stations in Mumbai, Maharashtra.
The system was inaugurated Chhatrapati Shivaji Terminus (CST), Dadar, Kurla and Lokmanya Tilak Terminus (LTT), Kalyan and Thane.
The ISS is advanced security systems that aims at improving security on Railway premises and also ensure safety of the people and avert terror attacks in extreme case.
The system has a total of 118 CCTV cameras. They will beam the live images of railway stations under its coverage on six monitors.
In the first of the project which was completed in June 2015 it covered four stations CST, Dadar, Kurla and LTT. The second phase is expected to be completed by December 2016.
Apart from this, he also inaugurated a modified foot over bridge (FOB) to facilitate passenger movement at Diva.