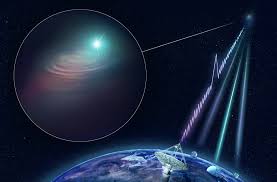 NASA recently reported that it observed a mix of radio signals and X-ray in Milky Way in April 2020. This has never been observed earlier in the galaxy. NASA has also reported the spotting of Fast Radio Bursts. This was detected by the CHIME telescope.

What are Fast Radio Bursts?

Fast Radio Bursts are bright bursts of radio waves produced by astronomical objects with changing magnetic fields. The duration of these bursts last only for milli-second. Due to this short duration of occurrence, it is highly difficult to spot Fast Radio Bursts.

The Fast Radio Burst spotted in Milky Way Galaxy in April 2020 was from a powerful neutron star. It is referred to as Magnetar. It is located in the constellation Vulpecula.

CHIME is Canadian Hydrogen Intensity Mapping Experiment. It is a radio telescope located in Canada. It is a telescope used to receive radio waves.

They are energetic electromagnetic events occurring in the universe. The Gamma Ray Bursts are resulted from the merger of binary neutron stars.