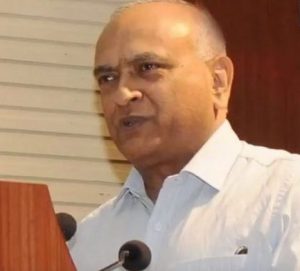 Radha Krishna Mathur (65) was formally sworn in as first ever Lieutenant Governor of newly carved Union Territory of Ladakh on 31 October 2019. He was nominated to be the first Lieutenant Governor of Ladakh by President of India on 25 October 2019. He was administered Oath of Office and Secrecy by Chief Justice of Jammu and Kashmir High Court Gita Mittal.

On 31 October 2019 the reorganization of erstwhile State of Jammu & Kashmir into two Union Territories of Jammu & Kashmir and Ladakh came into existence. The day also marks the birth anniversary of Iron man of India, Sardar Vallabhbhai Patel who is credited with merger of over 560 states into Union of India.

Centre has also appointed Umang Narula, a 1989-batch IAS officer, as the advisor to newly-appointed Lt Governor of Ladakh.  At present, Umang is posted as principal secretary to Jammu and Kashmir Governor Satya Pal Malilk.

SS Khandare, a 1995-batch IPS officer, has been appointed Head of Police of Union Territory of Ladakh.

New Provision for Ladakh as a UT

The creation of two new Union Territories of Jammu & Kashmir and Ladakh follows a landmark decision by the centre to abrogate Article 370 and 35A of the constitution on 5 August 2019.

Moreover, the Scheduled Lists of 106 central laws will be applicable to two newly carved UT’s, which includes the Aadhaar Act, 2016, Indian Penal Code (IPC), 1860, and Right to Education Act (RTE), 2009. Moreover, the bodies such as SC commission, ST commission and Minority commission will be setup in both UTs.

NOTE: Ladakh has a population of nearly 3 lakh and is strategically located as it shares borders with Pakistan as well as China.