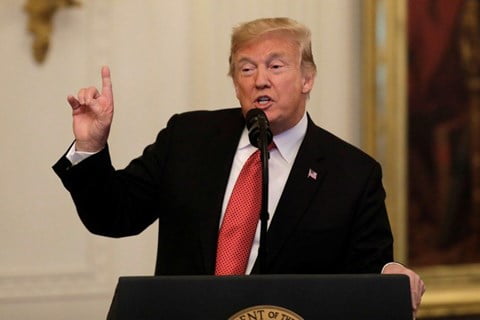 United States (US) President Donald Trump has announced that US will unilaterally pull out of three-decade-old Intermediate-Range Nuclear Forces (INF) treaty signed with Russia during Cold War.

It was crucial Cold War-era treaty banning development, testing and possession of short and medium range ground-launched nuclear missiles with range of 500-5,000 km. The treaty was signed in December 1987 between then US President Ronald Reagan and his USSR counterpart Mikhail Gorbachev.
The treaty banned all nuclear and conventional missiles, as well as their launchers, with ranges of 500–1,000 km or (short-range) and 1,000–5,500 km (intermediate-range). This treaty was central to ending arms race between two superpowers during cold war and protected America’s NATO allies in Europe from Soviet missile attacks. It was designed to provide measure of some strategic stability on continent of Europe.

Reasons of US withdrawal

US President Trump has alleged that Russia has violated treaty and has been violating it for many years. This violation comes after Russia’s alleged development and deployment of Novator 9M729 missile (also known as SSC-8), that could strike Europe at short notice.
Accusations of Russia violating this treaty pre-dates Trump presidency and go back to 2008 during President Obama administration. Under former President Barack Obama raised issue of Russia testing ground-launched cruise missile with Russian President Vladimir Putin in 2014. But Russia had denied allegations and raised counter-allegations of the US installing missile defence systems in Europe. While two countries failed to find resolution using dispute resolution mechanism in treaty, US continued to remain party to treaty under pressure from its European allies.

The unilateral withdrawal from this treaty will allow US new nuclear weapon options in Pacific in its efforts to counter China’s growing influence. There are also concerns that unilateral termination of this treaty could mark beginning of new arms race between US and Russia.