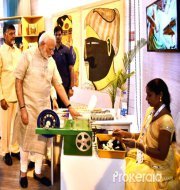 India’s textiles sector is one of the oldest industries in Indian economy dating back several centuries. Even today, it is one of the largest contributors to India’s exports with approximately 11% of total exports (exports during FY 2015-16 stood at US$ 40 billion). It contributes approximately 5% to India’s Gross Domestic Product (GDP), and 14% to overall Index of Industrial Production (IIP). It is also labour intensive and is the second largest employer after agriculture. Government has allowed 100% FDI in the Indian textiles sector under the automatic route.