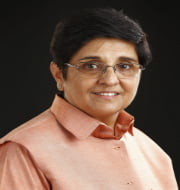 President Pranab Mukherjee has appointed BJP leader and former IPS officer Kiran Bedi as the Lieutenant Governor (LG) of Puducherry as per Article 239 of the Constitution.
The a post LG was vacant for the past two years after the Union Government had sacked Virendra Kataria from the post in July 2014.
Since then, it was under the additional charge of Ajay Kumar Singh, Lt. Governor of Andaman and Nicobar Islands.