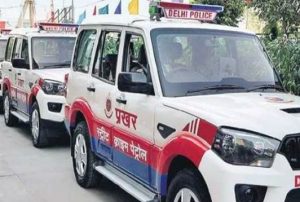 Delhi Police Commissioner Amulya Patnaik flagged off 15 ‘PRAKHAR’ vans from the police headquarters at ITO, New Delhi. The vans are special vehicles to curb street crimes in the national capital.  The new vans are in addition to already operational 15 ‘PRAKHAR’ vans launched in September 2019, thus taking the total number of vans plying in New Delhi to 30.

These patrol vans are tasked especially to curb street crimes as well as crimes against women in vulnerable areas in the national capital. They are specially designed and equipped with latest gadgets for quick transmission of information about any crime.

Feature: Besides the wireless set, each ‘PRAKHAR’ van is also equipped with Mobile Data Terminal (MDT) with inbuilt GPS. For immediate action, the MDT immediately transmits calls related to street crimes as soon as it is received in Command Room to concerned nearest PRAKHAR’ van.

These vans conduct intensive patrolling and dedicated checking at vulnerable points in crime-prone areas of the districts. Thus with the latest induction, each district will now have 2 such vans to cover vulnerable stretches.

The deterrent presence of ‘PRAKHAR’ MPVs (Multi-purpose Vehicle) has substantially helped in curbing crime. During the one month of operation of these patrol vans in city, the number of calls related to snatching and robbery incidents have decreased in localities covered by them.