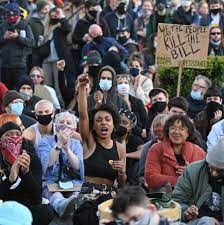 Why is Police and Crime Bill being passed?

Currently, the British Police is using public order legislation called the Public Order Act passed in 1986 to manage the protests in the country. However, according to the British Government, this legislation is no longer fit to manage the types of protests that are faced in the country. The “April Uprising” is being cited as an example where the protests went out of control. The British Police spent 16 million USD to control the April Uprising.

Why are people protesting against the bill?